Your Boss is an Asshole 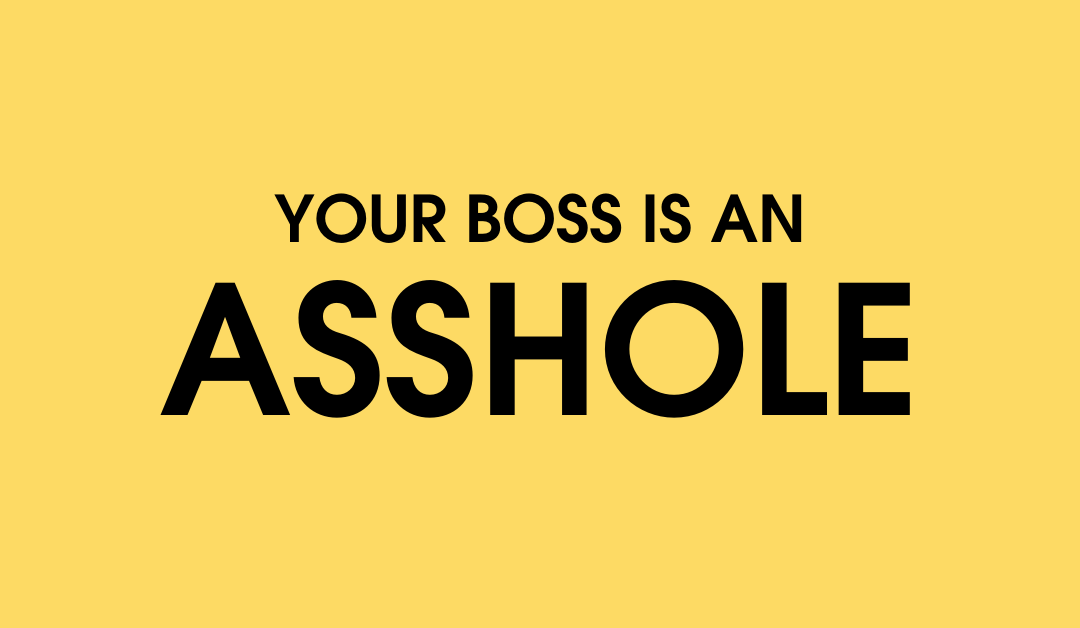 Yep, I said it. It’s true. Your boss is an asshole. He’s always micro-managing you, never gives you positive reinforcement, only points out what you did wrong.
You do a million great things and the one thing that you miss, that isn’t even a big deal, your boss is all over you.

He can’t even leave you alone when you’re on vacation, or worse, he makes you feel guilty for even taking any time off.

She’s always setting impossible standards that you can never attain. It seems like no matter what you do, it will never be good enough.

Your Boss is an Asshole!

Now, I’m not talking about your boss in the classic sense, like your supervisor or senior leader or investors.

I’m talking about YOU and what kind of boss you are to yourself.

How ever bad your boss is, you are at least ten times meaner, harsher, more critical and demanding than he or she could ever be. If you were your actual boss, you would be fired or put in jail for workplace abuse.

In fact, the level to which you hate your actual boss, is most likely a reflection of the misdirected anger and hatred you have toward yourself.

So, I invite you to ask yourself:

What kind of boss am I to myself?

And in today’s age, we are all our own boss.

I remember the day I realized how much of an asshole of a boss I was to myself. It was December 21st, 2012, 1:30 in the afternoon at my home office in St Louis. This was the last day before a little Christmas holiday and I sat there at my desk, frustrated and scared, staring blankly at my computer screen.

I was burnt out, tired and beating the absolute shit out of myself, trying to make myself do something productive. I would not let myself quit working until I got to some arbitrary time of the day where I felt like I had suffered the appropriate amount of time.

When I’m in that state, frustrated, hopeless, exhausted; there is virtually nothing productive that is going to come out of it. Especially for someone in business of people and leadership.

I realized for the first time, that I was my own boss, and my boss was forcing me to sit there and suffer when most people were taking Friday afternoon off to start the holiday early. Did I quit my job for this? Did I become my own boss, just to be a worse, more demanding, more insensitive boss? Heck No!

I decided in that moment to step away from the computer. A good boss would tell me to take the afternoon off, give yourself a break today and get started on your holiday break.

I went and did something completely frivolous with my time: I went to an afternoon movie, which I never do. I watched Lincoln at the Chase Park Plaza in the Central West End of St Louis, sitting behind a group of nuns at the movie theatre.

It was awesome and generous and empowering to myself. I took that new way of being with myself into the new year and my business began to take off. The better boss I’ve been to myself, the more results I’ve produced and the happier I become. The better boss I am, the better friend, husband and father I am.

So, let me ask you this.

This isn’t some touchy feely idea about being a teddy bear to yourself. It’s absolutely critical that you learn to be a great boss for yourself in order to produce the results you want in life and business.

One last caveat for business leaders. People that follow you, learn way more from your example than from what you say. If you are being a jerk to yourself or setting impossible standards for yourself with no reward, they will think that is what you want them to do to be successful.

And that has a shelf life. They will leave the team, mail it in with their effort, or, at best, give you a roller coaster of effort, then quit.

Please, for your success and theirs, stop being an asshole to yourself.