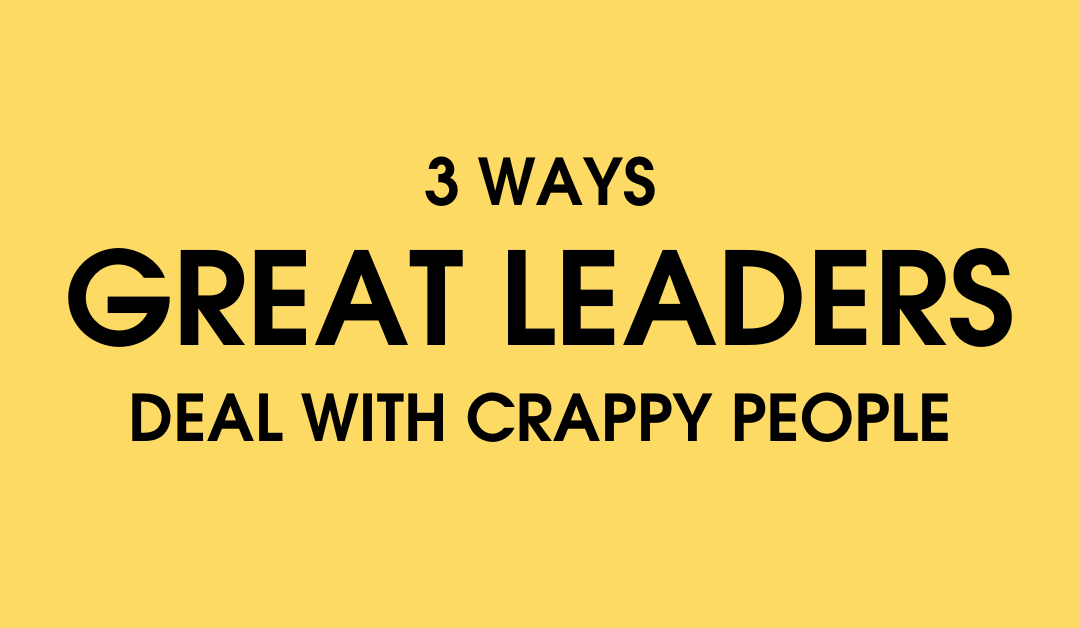 I’m not going to give you 3 ways great leaders deal with crappy people.  Sorry about the misleading headline.

Because, the truth is, great leaders don’t see people as crappy people.

Great leaders see the essential greatness in their people and focus on amplifying that greatness. This is not to say that great leaders don’t cut ties with people who are unwilling to change.

I remember a soldier I worked with about 12 years ago. I was a young leader in the Army Reserves, attending my weekend drill in Granite City, Illinois. This soldier was a few months out of basic training and had just been reassigned to me. He was 19 years old and quickly got branded as the very technical Army term for a poor performing soldier, “shit bag.” He acquired that reputation very quickly, all it took was showing up late a few times, then not showing up at all once or twice.

Like a lot of cultures, it’s easier to dismiss someone, than it is to connect with them and try to understand what’s going on. Relating to this person as a “shit bag” creates only one possible outcome, continued poor performance or quitting.

Luckily for me, I related to this young soldier. I often kicked myself in my own ass, by showing up late or finding some other way to sabotage myself. It’s not that I was a “shit bag,” I was just learning how to grow up. I needed someone to believe in me and to help me grow into my potential.

Fortunately, as a young soldier in the Army, I had great leaders like that, and I learned from them. I learned that no one is a “shit bag,” and, as a leader, it was my responsibility to see the greatness in everyone and to call that greatness forth.

I had one conversation with this soldier. I simply connected with him. I asked him what was going on in his life, what his goals were in the Army, how he was feeling.

Sure enough, he knew he had messed up, but worse, he felt like he could never win now that he had been branded as a “shit bag.”

Let me ask you, how motivated would you be to show up in your greatness in an environment where people thought you were a piece of shit, that you are useless and irredeemable?

As a leader, whether you say it directly or not, people sense how you relate to them and it is devastating to a person. When you are related to what’s not perfect about them, it’s devastating to their spirit and when someone’s spirit is devastated, there is no way they can perform sustainably.

In that one conversation, that soldier got that I cared about him, I saw his greatness and that I related to him that way. This wasn’t a trick; in connecting with him, I authentically saw his greatness and I let him know that I was his partner if he was willing to recommit to bringing his gifts and going after his goals.

I couldn’t do the work for him, but I believed in him. I didn’t need perfection, just practice.

The conversation shifted from punishment and dismissal to empowerment and possibility.

That soldier started showing up, grew his professionalism and became a productive member of my team and the Army.

The takeaway? Yes, you can hire “good” people who never have problems or challenges (until they do), but it’s a flawed way of cultivating a high performing team or organization.

Great leaders start with the idea that every single human being is essentially great and that it is their responsibility to cultivate that greatness.

A great farmer doesn’t blame the seed for not germinating and flowering. A great farmer looks at what’s missing for the seed to flourish, for what they haven’t considered or provided?

You tell me, which farmer is going to have a more prosperous crop? The one blaming the seeds, or the one looking on their side?

You tell me, which leader is going to have a more prosperous organization and team? The leader blaming and dismissing people on their team, or the one related to the essential greatness of each member of their team, that works earnestly to bring that greatness forth?

Who on your team are you least connected to? Take that person to lunch or set up a one to one. Connect with them. Get to know them. Ask them about their goals and their dreams. Listen for their greatness.